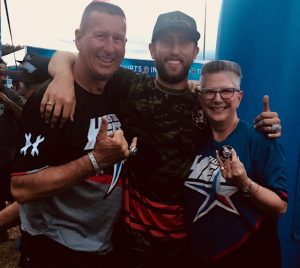 Houston Heat is a championship professional paintball team based out of Houston, Texas. The team competes in the NXL League in the U.S. – nxlpaintball.com.

The players, brought together by Randy Smith (Sarge) and his wife Danette (Momma D), reside in Pennsylvania, Indiana, Illinois, Texas, as well as abroad in Moscow, Russia.

Sarge and Momma D met in Houston, married in Houston and their three kids were born in Houston; thus Houston is “home,” although the family has moved several times since 2001.

It was the move to Oklahoma City where their oldest son Ryan first played paintball. Then it was the move to Chicago where he started competing locally in Young Guns, which led to the 2007 formation of Distortion (a team that competed up through the ranks of PSP and NXL from 2007 through 2017). It was the move to Toronto that provided the opportunity for several players on the current roster to play in the Canadian Xtreme Paintball League for Windsor Lockdown and win the Richmond Cup in 2011. In early 2012, Sarge and Momma D moved west to Southern California, but the team usually meets in Houston or Southern California to practice before events.

Formed in early 2012 and guided by the motto “One team, one family, one point at a time,” this professional paintball team won three 2012 PSP tournaments (Phoenix Open, Mid-Atlantic Open, and World Cup) in their first season. They also took home the overall series championship title, a feat never accomplished by a newly formed professional paintball team in their first season.

To learn more about our players, please visit our Roster.